By Olivier Jamin ChangeartFebruary 27, 2020No Comments

We all know how certain melodies can stick in our brains—just  hearing a few notes, we know exactly which song or piece of music this melody relates to.

Today’s topic is about one of the most iconic melodies of all time: the opening of Beethoven’s Fifth Symphony. It’s only four notes but their power is undeniable, crossing barriers of time and place, cultural differences, and musical tastes.

Stories say that he wrote this musical phrase to symbolize fate knocking on a door, others have suggested the melody was inspired by the song of a bird.

We will never know the exact truth but what we do know is  that the opening motif is universally recognized. For 200 years, it has been copied and adapted to a multitude of musical genres around the world.  Even more remarkable, these four simple notes show no sign of diminishing in their power to evoke emotion, strength and fortitude.

So how did this symphonic “jingle” composed by a genius become legendary?

We can begin by explaining the context in which Beethoven composed his 5th symphony.

In 1798, he started to experience hearing loss. By 1804, the year he composed this symphony, his deafness had progressed significantly. While he grappled with this devastating fate, he fought back, defiantly summoning his creative forces to write this innovative piece of music.

The “Dah-Dah-Dah-Duh!” introduction we know so well was in fact a modern, groundbreaking musical idea. Its startling opening, based on a strong rhythmic intensity, drama, and darkness, made a bold statement—one he made sure to repeat throughout the entire symphony. 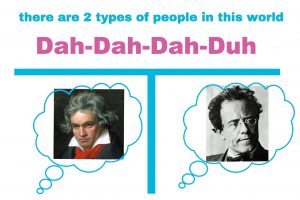 Soon after the premiere in 1808, the symphony acquired its status as a central item in orchestral repertoires. Several orchestras chose the Fifth Symphony for their inaugural concerts, including The New York Philharmonic in 1842.

A century later, the Austrian composer Gustav Mahler gave Beethoven a musical wink while writing his… 5th symphony. He re-orchestrated the 4-note phrase and modernized it by incorporating instruments that didn’t exist 100 years before.

During World War II, the allies broadcasting propaganda messages through the BBC radio to defy the enemy chose the 4-note opening melody (3 short notes and one longer note) to introduce every single communication.

Here are a few other intriguing curiosities about the Fifth symphony:

Later on, the ‘Fifth’ was remixed in various musical genres like jazz, reggae and disco.

In 1977, along with other iconic images, common sounds and music on Earth, a version of the Beethoven’s Fifth’s Symphony—first movement—was launched into outer space on space probe Voyager. (add golden record  image next to the text)

Today, Beethoven’s remarkable and enduring piece continues to resonate with everyone and shows no signs of waning for centuries to come.